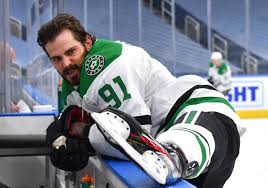 Tyler Paul Seguin (born January 31, 1992) is a Canadian professional ice hockey centre and alternate captain for the Dallas Stars of the National Hockey League (NHL). Seguin was selected second overall in the 2010 NHL Entry Draft by the Boston Bruins and went on to win the 2011 Stanley Cup in his rookie season. He finished the 2011–12 season in Boston with a plus-minus of +34, the second highest in the NHL.

During the 2012–13 NHL lockout, Seguin played for EHC Biel of the Swiss National League A (NLA) and finished the season with 25 goals, the most on the team. In 2013, Seguin played in his second Stanley Cup Finals in three seasons, ultimately losing the series to the Chicago Blackhawks. On July 4, 2013, Seguin was traded by the Bruins to the Dallas Stars for a package of players including Loui Eriksson and Reilly Smith.

Seguin was born in Brampton, but grew up in Whitby, Ontario, Canada, with his two younger sisters, Candace and Cassidy. His parents are Jackie and Paul Seguin. He grew up in a hockey household; both of his parents and both sisters play hockey, with his father having played college ice hockey for the University of Vermont.

Seguin attended St. Michael’s College School in Toronto prior to being drafted by the Plymouth Whalers of the Ontario Hockey League (OHL).

Seguin’s favorite player as a child was Steve Yzerman, to whom his playing style has been compared.[1]

Seguin played the first seven years of his minor hockey career with the Whitby Wildcats of the Ontario Minor Hockey Association (OMHA) before relocating to Brampton, Ontario, at age 13. While in Brampton, he played three years for the Toronto Young Nationals, coached by Rick Vaive, before moving on to the OHL.[2][3]

Seguin was selected ninth overall in the 2008 OHL Priority Selection Draft by the Plymouth Whalers. He considered playing for an NCAA school like his father, but chose to forgo his American college eligibility by joining the Whalers in 2008–09.[4] He struggled to begin his OHL career, scoring just one goal in his first 17 games before a coaching change in Plymouth helped Seguin find his place in the League.[5]

Looking for an improved start to his 2009–10 season, Seguin spent his summer working on his game.[5] His dedication paid off, as he opened the season with 36 points in 18 games until sidelined by a hip pointer.[2] His early season success led NHL Central Scouting to name him the top prospect for the 2010 NHL Entry Draft.[6] He then slipped to second, behind Taylor Hall, who was eventually selected first overall by the Edmonton Oilers.

Seguin captained Team Orr at the 2010 CHL Top Prospects Game.[7] Seguin jointly won the Eddie Powers Memorial Trophy by finishing the 2009–10 season with the highest number of points in the OHL; he scored 106 points (48 goals and 58 assists) alongside Taylor Hall (106 points from 40 goals and 66 assists).[8] With a strong finish to the year, Seguin finished as the top ranked North American skater in the draft class of 2010.[9][10] 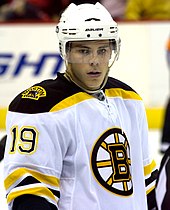 Seguin with the Bruins during his rookie season in the NHL, November 2010

Seguin was drafted second overall on June 25, 2010, by the Boston Bruins using a pick the team had previously acquired from the Toronto Maple Leafs in a trade for Phil Kessel.[11] Seguin then signed an entry-level contract with the Bruins on August 3 and later made his NHL debut on October 9 in a 5–2 loss to the Phoenix Coyotes. He scored his first career NHL goal on October 10, also against Phoenix, midway through the game’s third period, receiving the puck on a pass from teammate Michael Ryder and scoring on a breakaway backhand goal past goaltender Ilya Bryzgalov in a 3–0 shutout of the Coyotes.[12] Seguin participated in the 2011 All-Star festivities during the Rookie Skills Competition. Late in the 2010–11 season, Seguin was quoted as having a desire to model his NHL playing style on that of teammate Patrice Bergeron.[13]

After being a healthy scratch for the first two rounds of the 2011 Stanley Cup playoffs, Seguin was included in the Boston lineup to start Round 3, the Eastern Conference Finals, against the Tampa Bay Lightning after centreman Patrice Bergeron sustained a mild concussion. Seguin scored a goal and added an assist in his first game played, then followed that up with two goals and two assists in his second game. He became the first teenager to score four points in a Stanley Cup playoff game since Trevor Linden did so for the Vancouver Canucks in 1989. On June 15, 2011, Boston won the Stanley Cup in the Finals, prevailing over Vancouver in a 4–3 series victory.

On November 5, 2011, Seguin scored his first career NHL hat trick against the team that traded the draft pick to the Bruins, the Toronto Maple Leafs. On November 14, Seguin was named NHL’s First Star of the Week for his four goals and two assists that helped the Bruins to three wins in the week. On December 8, he played in his 100th career NHL game against the Florida Panthers. On April 22, 2012, Seguin scored in overtime of Game 6 of the Bruins’ Eastern Conference Quarterfinals series against the Washington Capitals that sent the series to a Game 7. However, despite another goal from Seguin in Game 7, the Bruins would go on to lose the game in overtime and were thus eliminated from the playoffs. He finished the 2011–12 season as the Bruins’ leading scorer.

Seguin played for EHC Biel of the Swiss National League A (NLA) during the 2012–13 NHL lockout. In 29 NLA games, Seguin scored 25 goals and 15 assists, playing alongside fellow NHL star Patrick Kane. Seguin also played for Team Canada at the 2012 Spengler Cup in December 2012, where he won a gold medal with the team. When the lockout ended, the NHL played a shortened, 48-game season in 2013; Seguin finished the regular season with 32 points (16 goals and 16 assists). The Bruins went on to reach the 2013 Stanley Cup Finals, but ultimately lost to the Chicago Blackhawks in the six-game series. Seguin scored one goal and seven assists in the 2013 playoffs.

Seguin signing autographs at the Galleria Dallas in 2014.

On July 4, 2013, during the subsequent NHL off-season, Boston traded Seguin, along with Rich Peverley and Ryan Button, to the Dallas Stars in exchange for Loui Eriksson, Reilly Smith, Matt Fraser and Joe Morrow.[14] Due to the jersey number 19 being retired by the Stars in honour of the late Bill Masterton, Seguin changed his number from 19 to 91 upon joining Dallas. Seguin would break-out as an offensive force in the League as a member of the Stars, developing excellent chemistry with team captain Jamie Benn. Seguin recorded a five-point performance (four goals and one assist) in a dominant 7–3 victory over the Calgary Flames on November 14, 2013. On March 16, 2014, he reached the 30-goal mark in a season for the first time in his career after scoring against goaltender Al Montoya of the Winnipeg Jets. Seguin would end the 2013–14 season ranked fourth in total points scored, setting a new career-high in goals (37) and points (84) from 80 games. At the end of the 2013–14 season, Seguin was nominated for the King Clancy Memorial Trophy,[15] which eventually went to Andrew Ference.

In the 2019-20 season, Seguin would make his third career Stanley Cup Finals appearance, and his first with the Dallas Stars. They would go on to lose the series 4-2 to the eventual champion Tampa Bay Lightning. He finished with 13 points in 26 playoff games.

After a mediocre playoff performance, the Stars announced that Seguin would be out for five months recovering from a right hip arthroscopy and labral repair.

Seguin competed for Canada at the 2009 Ivan Hlinka Memorial Tournament in the Czech Republic, where he led the team in scoring with ten points in four games as Canada won the gold medal.[5] He then attended Hockey Canada‘s selection camp for the 2010 World Junior Ice Hockey Championships in December 2009, but did not make the team.[19] Previously, he won gold with Team Ontario in the 2009 World U-17 Hockey Challenge in Port Alberni, British Columbia,[20] and finished second in tournament scoring with 11 points in six games.[21] Seguin attended Canada’s World Junior selection camp in Regina, Saskatchewan, for the World Junior Championships, the under-20 level, but again failed to make the team. In 2015, he was a member of Canada’s gold medal-winning team at the World Hockey Championships.[22]

In 2017, Seguin made a cameo appearance in the movie Goon: Last of the Enforcers.[28]

As the result of one of his best friends suffering a severe spinal cord injury in December 2012, Seguin founded Seguin’s Stars upon arriving in Dallas. At every Stars home game during the season, Seguin donated a luxury suite, along with food and beverage, for individuals with spinal cord injuries.[29] Seguin’s Stars, along with Dallas Stars Foundation also donated a luxury suite to the Big Brothers Big Sisters organization in 2015 and 2017.[30] At the conclusion of every game, Seguin meets his special guests outside of the Stars’ locker room for autographs and pictures, often with other members of the team.[31] 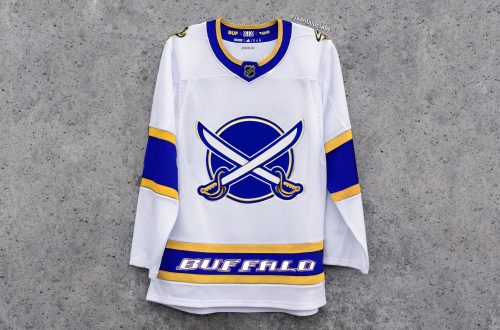